We Can Fix It!

How to Disrupt the Impact of Big Money on Politics 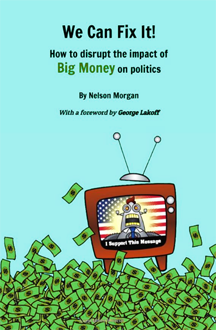 A tsunami of money has flooded the American political landscape. Powerful interests are overwhelming the political process. Politicians spend all their time fundraising, rather than governing. How can we disrupt these effects?

This book explains the UpRise approach: targeted grassroots organizing that significantly reduces the cost of effective campaigns, so candidates don’t need to raise huge sums in order to win. The book begins with a foreword by George Lakoff, the Berkeley linguist and cognitive scientist who has written extensively about the political process. It describes the problem and current approaches to solving it, and proposes a new way to fix it.

The big idea? No big money. No attack ads. Just people and candidates working together to run clean, affordable, and powerful campaigns.

“The campaign strategies currently in place have led to the current expensive infrastructure. It is time to look closely at these strategies and question them. This booklet is about a piece of this new outlook, the part that is a way out of the dominance of the effect of large campaign contributions.”

— From the Foreword by George Lakoff

We are here thanks to the generosity of people like you.