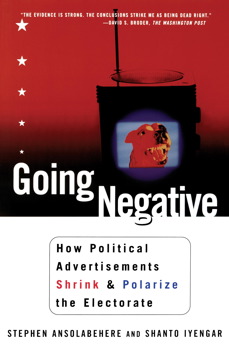 We address the effects of negative campaign advertising on turnout. Using a unique experimental design in which advertising tone is manipulated within the identical audiovisual context, we find that exposure to negative advertisements dropped intentions to vote by 5%. We then replicate this result through an aggregate-level analysis of turnout and campaign tone in the 1992 Senate elections.

Finally, we show that the demobilizing effects of negative campaigns are accompanied by a weakened sense of political efficacy. Voters who watch negative advertisements become more cynical about the responsiveness of public officials and the electoral process.